As I’ve already mentioned, I spent 18 months learning Japanese hardcore (still learning it softcore now that I live in Japan), and in that time I learned a lot about both Japanese and just life in general. I have lot to throw at you, and it’s best to do it piecemeal.

Right, let’s give you an overview of the method I used to learn Japanese to fluency in 18 months. There’s no real magic to this way of learning, but it is effective, and you or anyone else could repeat it.

Here’s a visual overview of the phases. 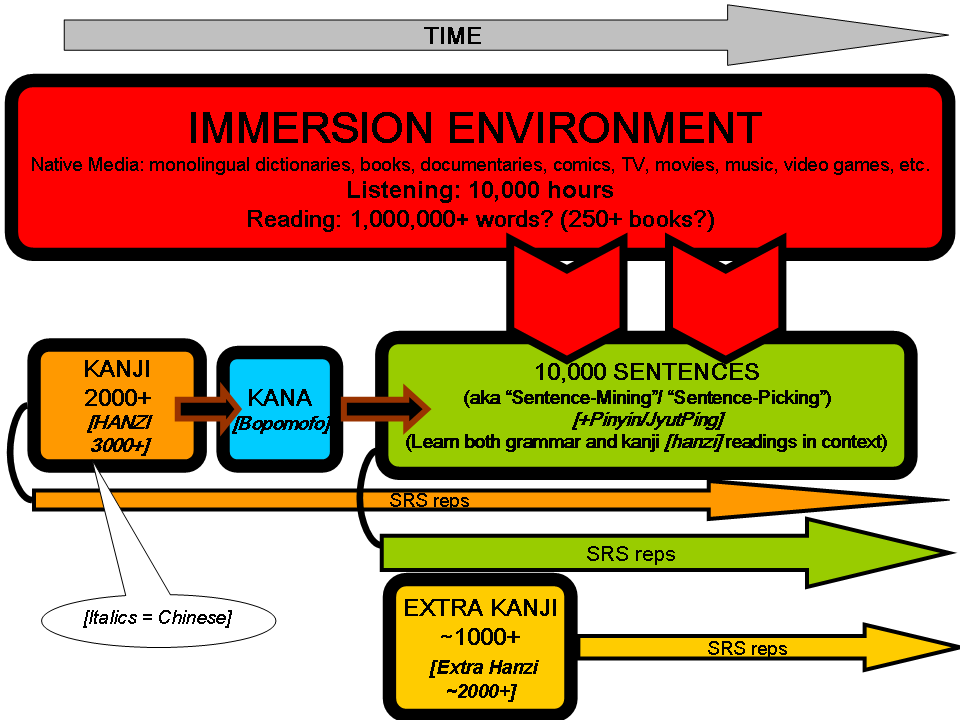 This one isn’t on the diagram :D. Start believing you can do it (you’re thinking “that’s stupid; Khatzumoto has been eating stale sushi again; how is this a phase?”, but you’d be amazed how many people set off on the noble journey of learning Japanese, but forget to first believe that they can reach their destination: what a dreadful way to start off!) But not you. You’re going to start believing that you can and will become fluent in Japanese.

Believing in yourself is essential, but by itself it obviously won’t get you anywhere. We know that ability is useless without motivation, but motivation is not a substitute for knowledge and knowledge is gained through daily action.

Phase 1: Get the equipment for daily action

This is less a phase and more a continuing…thing. But it’s really crucial. It’s the center around which this “method” revolves. You are basically simulating being raised as a native speaker of Japanese.

Language learning involves lots of memorization, and if you want to memorize large quantities of information over a long time, then drop the paper flashcards, mate. You need an SRS: a spaced repetition system.

An SRS is a program that tests you on electronic flashcards (which you make), at a frequency that it determines is best for you. The goal is to make this frequency high enough that you don’t forget, but low enough that you don’t waste your time. So the system will show you the card as infrequently as possible. Sounds like common sense? It is, but it’s very powerful common sense. Truth be told, you could even manage it with paper cards, except that that would be a beastly, medieval amount of work to do. Trust me, I have tried managing paper flash cards in this way and it takes up too much time. Let the computer do it for you.

There are many SRS around and many are free. Let’s focus on the free ones. I wrote a web-based one called KhatzuMemo; it’s web-based only; it’s still under development, so it’s very short on features. Mnemosyne is offline only, no-frills but very reliable. Anki is deservedly the most popular choice out there right now; it works both online and offline and boasts a rich feature set and even supports plugins…with the speed of updates, it can be a bit unstable sometimes, but…I’m just finding fault out of jealousy. Finally, I used to use a commercial (not free) SRS called SuperMemo, it is perhaps the oldest in the field — just about every SRS I know of was inspired by SM — unfortunately, its user interface is buggy and complex.

Ultimately, it matters less which SRS you pick and more that you use one.

Learn at least 2046 general use kanji in English, using James Heisig’s seminal book, Remembering the Kanji (RTK), Part I. Part II is unnecessary. Part III is good; you can do it right after Part I or mix it in with later phases if you want.

The idea is that given a single English keyword, you learn to write out every general use kanji from memory. Don’t argue with me, just do it. You’ll thank me later. You input the stuff from the book into the SRS. If you think that’s tedious, then you’re right. But the data entry itself may help you remember better. If you want to avoid the typing, you can join the Remembering the Kanji Yahoo Group, people there have typed the stuff up for you. Alternatively, Reviewing the Kanji is a website where people learning kanji using Heisig’s book gather. I didn’t use it myself, but I hear great things about it.

Do not: pause in your kanji study. Do not: start learning Japanese grammar on the side before finishing kanji. Learn kanji first. If you’re going at like 25 kanji/day, then it will take 3 months. At 12 kanji/day, it will take 6 months. And that’s fine; if you’re a busy person with other commitments, then it’s going to take that much time. Stay the course. The sooner you start, the sooner you’ll be done. Start today, and you will thank me later.

Learn the 46 hiragana and katakana respectively using Heisig’s Remembering the Kana. Why do this after kanji? No particular reason…you could do the kana first if you wanted, even though you won’t be using them much.

Learn to read aloud 10,000 gramatically correct, native-like Japanese sentences/phrases (confession: I only learned ~7500 in the 18-month period, but you are better than me).

You’re not a computer compiler, evaluating expressions based on rules. You’re a human being, and humans use a different logic. When you speak your native language, you generally are mixing and matching entire sentences/phrases. That’s what you want to do in Japanese — learn sentences, because not only do they give you the grammar, but also vocabulary and usage.

There you go, it’s that simple. Read on to find out more about each of these phases.