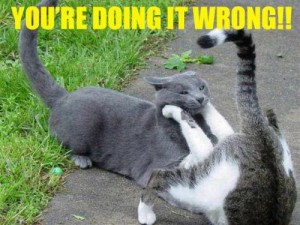 This is how I've been learning Japanese. What about it?

Today’s post comes from アンソニー, who comes to us with a confession. He learned Japanese the wrong way.

Through out the last three years of my Japanese project I…

watched 100 episodes of One Piece subbed in English,
spent way too much time thinking and worrying, and not enough doing,
spent too much time studying Japanese per day,
spent too little time studying Japanese per day,
saw the glass as half empty and thought pessimistically,
did things in Japanese that were too boring,
attended a Japanese class in college,
ditched Japanese class in college,
occasionally listened to English music or watched a movie in English,
spoke English to my Japanese friends,
allowed them to speak English to me,
I even read an entire manga series in English once,
DUDE, I’m not kidding, I read the entire series of Death Note in English, while doing All Japanese All the Time,
gave up studying Japanese,
spent to much time reading English,
probably read more English than Japanese the past few years,
tried to speak Japanese before I was ready (without enough input first),
held myself back from speaking by making the excuse “I’m not ready yet”,
contradicted myself countless times,
took AJATT.com too seriously,
did things in English when I knew darn well I could have done them in Japanese,
am writing this post when I SHOULD be doing my reps,
and used a bilingual dictionary (and still use sometimes).

But アンソニー isn’t coming to beg forgiveness. He has an epiphany to share.

Despite the many mistakes and ‘wrong’ attitudes of learning Japanese I used, I can now…

hang out with my Japanese friends and function pretty well using only Japanese,
use only Japanese with my girlfriend,
watch anime, movies, television in Japanese with no English subs, and understand anywhere between 60 – 90 % of the dialogue, depending on the material,
use a monolingual dictionary, no prob,
I don’t use English subs anymore!

my girlfriend, who was born and raised in Japan, sometimes asks me how to write a word in Kanji,
easily use a Japanese operating system on my computer (I’ve been using one since day one of this project),
read and produce 2268 kanjis from memory,
read manga and comprehend enough to follow the plot without a dictionary,
sometimes read complicated wiki entries and science articles in Japanese, with the occasional aid of Rikaichan,
listen to children’s podcasts like Fantajikan, and follow the story around 80% upon first hearing,
understand adult level comedy podcasts, like Junk Podcasts and get the gist of what they’re talking about,
I just watched 茶の味, no subs, and followed it and the dialogue pretty easy,
I learned a ship ton of time management skills, goal attainment attitudes, and mindsets to increase productivity,

I can sing many Japanese songs word for word,
I have around 5000 MCDS and sentence cards in my srs, not including my RTK deck,
I just recently went to Japan on vacation, first time ever setting foot in the country, and I was able to use only Japanese with virtually every interaction while I was there!
When my Japanese friend asks me if I know what チンカス means in attempt to mess with me, I’m all “yeah, what about it?” with a straight face,
I can shadow native speakers on podcasts effortlessly,
I’ve improved in many other ways I’m not thinking of right now.

Had アンソニー held himself to a standard of perfection, he would have given up.

And to do that, he knows he needs to move forward. If he finds that he’s stopped moving, he doesn’t say to himself, “gee, I’m not very good at moving forward. I should just stop trying to move.” Instead… he just starts moving again. And again. And again. All his sprints and spurts add up, bringing him to the awesomeness he is today.

Stuff just works out with acceptance and time. 🙂

Are you learning Japanese the wrong way? Don’t sweat it. Just keep moving.

16 comments for “Are you learning Japanese the wrong way?”