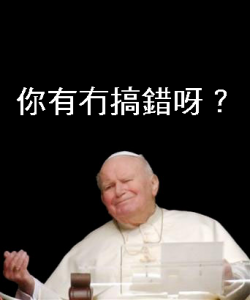 Keep cutting until you get to something so small, that you start tilting your head to one side, curling the corner of your mouth, and squinting your eyes in a sort of “That’s it? Are you kidding me?” pose. Sort of like the face Pope John Paul II made when I told him about this idea.

You have found a cell. A unit so small, you don’t care any more. A few years ago, this one cell actually split up so many times that it became Jennifer Lopez’s derrière. I hear the same thing happened to you, too. I’m guessing it was more mitosis than binary fission, but…same difference, really — it’s all cell division.

Can’t do your SRS reps today?
Do half of them.
Still too much?
Do half of that.
Too big? Keep dividing.
Maybe you’ll end up just doing one.
And that’s fine.

Just keep dividing those cells. Just keep cutting things in half. You basically never have to feel like you’re doing anything, you just focus on division. The addition and multiplication will take care of themselves.

There is no “hard”. There is only “needs smaller steps”. Cut. Slice. Dice. Make things too small to resist. That’s most of what timeboxing is about. It’s what our “cell division” is about. It’s what Maurer’s Kaizen Way (改善道 hmmm…sounds like a martial art 😛 ) is about.

You already know how to do this. You’ll have trouble regularly eating whole tomatoes, but if those same tomatoes are simply sliced up and placed between strips of bread, suddenly there’s no tomato left. And this is all happening despite the fact that you’re probably eating more than before.

The same thing goes for apples. You see a whole apple and you’re like “meeeh, I’m not feeling so apply”. Until, that is, a sliced apple is placed in your sphere of influence. Pretty soon, you’re running out of apples.

It’s not the “appetite” (ability), it’s the presentation. If you’re in charge of something (like learning a language on your own), you’re in charge of the presentation, too. Make it look nice for yourself. Make it appealing. Make it fun. Probably, your mother used to do this kind of thing for you. Now, no one does it for you. No one gives you colorful books and sweet-tasting medicine. Why? Because you don’t need it? No — because you can do it for yourself. You still need help, you’re just not helpless.

Do half-a**ed work. Make it so small and tasty that you cannot resist. Work from the most simple to the most complex tasks. And chill. Our actions compound whether we worry or not. Our actions produce effects of their own accord. We just have to do our part on the cause side. We often cannot directly control effects and it’s generally a huge waste of energy to try. But we’re always in charge of a bunch of causes. And that turns out to be more than enough. We already control all the causes we need to control.

Do your little, half-a**ed part. Let nature — biology, physics, whatever — take care of the rest.

Remember, it starts with one cell. The roundest buttocks…all used to be one cell. And no matter how big they get, they’re still nothing but a bunch of cells.

18 comments for “Buttocks and Binary Fission”