So, the Chinese Project is going really well. I made another shopping trip to my favorite Taiwanese online bookstore. These are new members of my Chinese media collection (except for 玩具總動員/Toy Story, which is an older member): 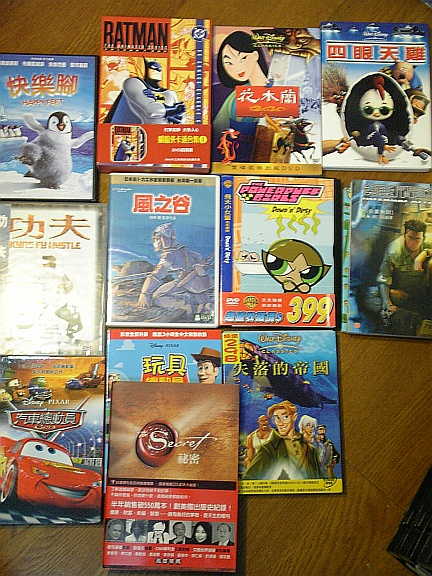 So, most of what I have are comic books and Disney/Pixar DVDs in Chinese. I also have Chinese-dubbed Powerpuff Girls, because I love that show; the dialogue is hilarious; the animation is top-notch minimalist and…and yeah. It’s a good show. McCracken and Tartakovsky are unsung geniuses; as far as I am aware, their work was the only thing in American TV animation worth watching during that dark age after both Batman: The Animated Series and Gargoyles had ended. Am I comparing Dexter’s Lab to Gargoyles? Yes.

I’ve already watched 玩具總動員/Toy Story about 10 times, I looped that “I’ll make a man of you/男子漢” song in 花木蘭/Mulan until people (Momoko) started making death threats. This is what I mean about having fun things to read and watch — you can learn a ton of words and sentences and have fun at the same time. I’ve been singing 男子漢 all night — I’ve even made up a version called 「孫小龍」 (my cat’s Chinese name…long story, but he was “hunting” and doing other manly (that’s sexist…lionesses hunt all the time…anyway) things, so it seemed more than appropriate).

Yes, that’s another personal development book at the bottom. I feel kind of embarassed buying stuff like that, like “what’s the matter, Khatzumoto — you need wittle help becwoming a bwetter pwerson?”, but…whatever, I guess. Actually, if you ever do get the chance, Brian Tracy’s Eat That Frog is a really good time management book. Short, sweet, no BS, straight to the point. Speaking of BS, there are of course a lot of shady people in the PD industry. I think part of the problem is that many people treat personal development with a fervor that is essentially religious; they’re looking for a religion — they’re looking for something that is good and true all the time and that they need only believe and obey in order to be happy. The problem is that the PD industry is very much a human endeavour, so it does require you to have your brain turned on and your BS radar working at full capacity. On the other hand, I think it’s immature — literally — a sign of underdeveloped thinking to say that “the PD industry has problems, therefore we should ignore it completely” — very much a baby-and-bathwater way of doing it. Some of its good, a lot of it sucks, and you have to pick out the good — the good authors, the good parts of the good authors’ books, and stuff. I don’t know…That particular PD book in the picture, by the way, has some people in it who are full of crap, so I wouldn’t recommend to you unless you’re happy separating wheat from chaff.

Also, in the past week, I realized that my ability to create a foreign-language environment is…too powerful. I was finding myself going for long stretches of time without ever using Japanese; this had no short-term effect, but I worry that it could stunt my Japanese growth in the long term. I don’t “need” to know any more Japanese than I do now — I can function as an adult — but why not go beyond that, I think? Why not keep building a massive vocabulary? So, in the interests of maintaining and expanding use of Japanese, I am scaling back my use of monolingual Chinese dictionaries — I am going back to using the laddering method, with Japanese as a base language for Chinese. Interestingly enough, though, my sojourn with Chinese monolingual dictionaries has given me a lot of confidence in using them, and sometimes when I’m unhappy with a certain Japanese definition, I refer to a C-C dictionary.