In “the literature” (a lot of it very good literature, like Talent Is Overrated and The Talent Code), it’s often said that, you know, we need to do “deliberate practice”, meaning stuff that’s actually a little hard and painful for us. Through deliberate practice, we grow. The reason pros get good and amateurs don’t is because they don’t do enough of this deliberate practice.

Apparently, the amateurs stay in their “comfort zone”, doing easy things, and so never grow. The pros, meanwhile, “stretch themselves”, by working effortfully in their “growth zone”; leaving their comfort zone makes them stronger, faster, longer, thicker and harder.

Um…How do I put this politely…

OK, “bollocks” is a strong word. It’s just, the thing is that these ideas are well and good in principle, but in practice they only hurt people. In practice, they will not get anyone to independently do what they need to do to reach pwnage. In practice, they boil down to a re-affirmation of a pattern of behavior that I rather prejudicially like to call ASM: “Anglo-Saxon Masochism” (here we go again) — what many often call the “Protestant/Calvinist work ethic”: no pain, no gain, bee arch; suffering breeds character, mofo.

Unfortunately, in the absence of violence, fear and/or coercion (preferably all three), these ideas aren’t going to help anyone.

Don’t get me wrong: if you have someone there in your life who’s constantly ready and willing to beat, scare or otherwise force you into working, then ASM will be effective. Very effective a few people may die or suffer nervous breakdowns, but we usually just call that “natural selection”. Many of the very best-regarded sports teams, schools and military organizations use it all the time.

But I can’t work like that — not independently. And I know you can’t, either. And I don’t want to live with fear, violence and coercion. Indeed, as soon as the apparatus of violence/fear/coercion is removed, many (former) sportsmen and soldiers become, well, fat people with lots of funny stories to tell about the good old days. And many former students become, well, fat people who used to know calculus. 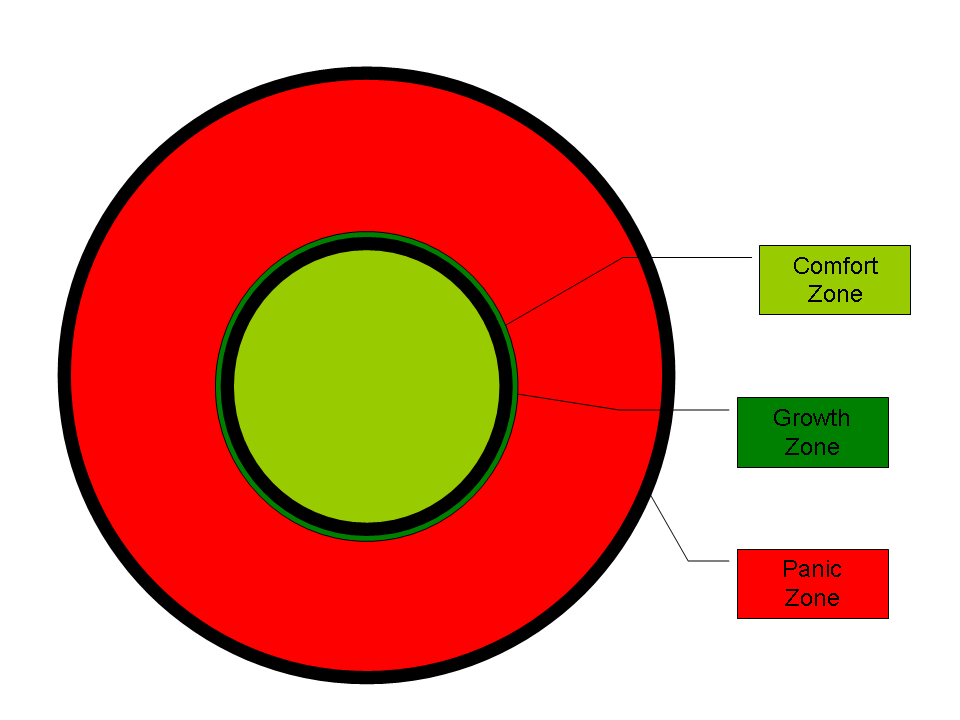 We who speak English natively — and are therefore participating in the same wider society — have probably had some degree of ASM culturally ingrained in us; we’ve been indoctrinated pretty well. That’s why you and I have had so much trouble doing things you otherwise want to do — like acquire some form of knowledge or skill, or produce some kind of product or performance. 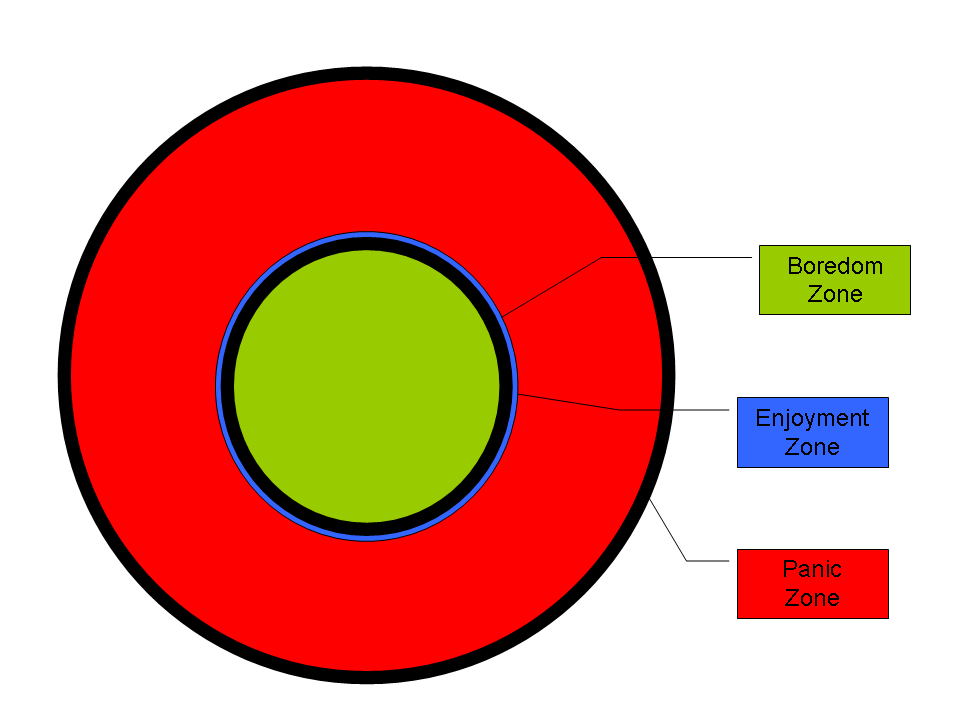 I don’t like this “no pain, no gain” crap. And we don’t need it. Comfort and growth are not mutually exclusive. Discomfort and growth are not the same thing — if they were, people with ill-fitting shoes would be the happiest, most successful, most productive in the world 😉 . Growth feels good. Or, at least, it can. Amateurs don’t fail to get good because they stay in their “comfort” zone, they fail to get good because either:

So, how do we get to that true comfort = enjoyment = growth zone? How do we get so that we’re consistently doing something? I’d give you a complicated formula, but neither you nor I would remember it, and what good is a good idea that you can’t keep in your head, ready to use, right? So here is what I do:

Set appearance/situational/environmental goals rather than action/completion goals. Rather than setting a goal to do the right thing, set a goal to be in the right place. Set a goal to show up. No more. NO MORE. Don’t get clever. Don’t try to achieve. As soon as you start getting clever and adding stuff, your body will rebel.

You don’t have to run tomorrow morning. You just have to have your shoes on and be standing outside. You don’t have to eat healthy food, you just have to have (only) healthy food in your house. Once you’ve fulfilled the situational goal, you can go back inside to eat potato chips (oh, wait…none in the house — better run to the grocery store to get some) and watch Robot Chicken (oh wait, I only have Japanese versions…) if you want. 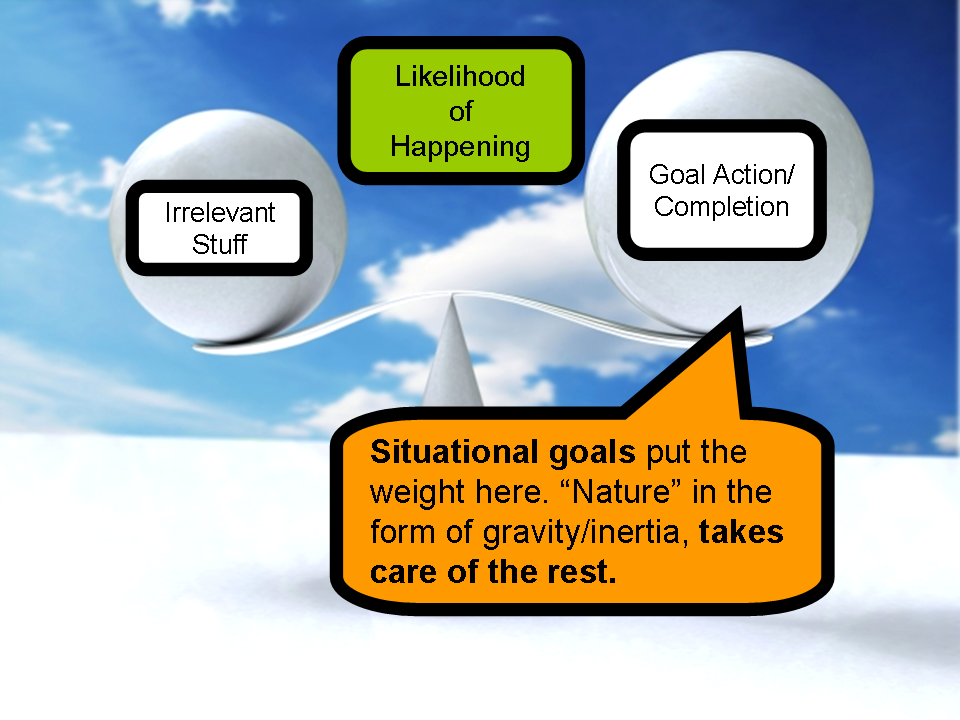 You may think just “being there”, standing outside with your shoes on, doesn’t do anything, and doesn’t achieve anything. And you’re right. But you’re also wrong. Because by being there you have done some incredibly profound scale-tipping — you have made it easier to do something, than to not do it. You have turned an uphill mountain hike into a playful, downward slide. You are now working with gravity, instead of against it.

This is how and why I “executed” and continue to execute my Japanese project so well. I never set a goal to even listen to a specific number of hours of Japanese. That’s far too mendokusai. Count? Are you joking? This isn’t effing Sesame Street. I simply set a goal to be in a position/location such that there was Japanese entering my eyes and ears. My goal was to either be in a room where Japanese sounds could be heard, or to have my headphones on and Japanese playing in them (my music player only had Japanese things on it, so this was cake).

This is also why it was actually easier for me to go “all Japanese” than “some Japanese” — “all Japanese” requires no management overhead whatsoever. The only “management” I did and do was shopping for more Japanese stuff. And we all love getting new stuff 😉 .

Can you see the difference?

Situational/environmental goals are actually very powerful. And people already recognize their negative power; they just don’t realize that they also have positive power. Do you know why your parents didn’t let you hang out with the bad kids? Not because you were actively going to do bad stuff, but because simply being with the bad kids was enough such that the situation would almost inevitably take itself in a bad direction, with or without your intervention and good intentions.

Don’t work to achieve something. Let the environment do the work for you.

Don’t do the right thing. Just be in the right place.

In short, set up the right system (this does require some effort, but very little — we have a lot of economic/technological infrastructure that makes this very easy for us), and then let the system’s inertia carry you all the way to your goal. The other cool thing is that you get you get an instant “win”, you don’t have to wait to get something “right” or “finished”, to feel good.

There are no guarantees in terms of quantity and speed, but “little and often” is more than good enough in most situations. As I always say: no project ever dies of malnutrition, only of complete-and-absolute starvation. Most things fall through not because someone was doing too little, but because he wasn’t doing anything at all. Most people don’t fail at scheduling because of being bad at scheduling, but because they never even look at the schedules they so lovingly made.

Each of us is like a river. We want to take the proverbial path of least resistance. Trying to use our willpower all the time — trying to “do” and “finish” things — is like trying to get the cooperation of every molecule in the river at every turn: tiring. By changing our environment, we basically tweak the path in small, simple but significant ways. And then we can go back to being our lazy selves for the remaining ~99% of the time, sliding down a path that we have altered to lead us right where we want to go.

Be your river-like self. Don’t climb up to Japanese. Slide down into it. Don’t know how? Think something up, try something out. That 1300 grams of meat inside your skull isn’t for decoration and it isn’t for slogging; it’s there for making your life simpler, easier and happier 😉 .

If you identify and take care of the preconditions, then goal achievement can happen as a side-effect, as an afterthought — as if you weren’t even trying (and, in truth, you won’t be).

Anyway, that’s my two cents. You guys always give great feedback, so I’m excited to hear your stories and advice 🙂 .