Time for another installment of the best of the AJATT+ forum!

So let’s talk about deleting cards.

I know we’ve said it a bunch of times, but it bears repeating. When your SRS deck starts to become more of a chore than a game, bad cards are most likely your problem.

Drewskie sums it up nicely:

As soon as I get that “uh…ew” feeling, it’s gone so fast I don’t even get time to second-guess. I have never been tempted to undo a deletion. If it’s iffy, it should be out. 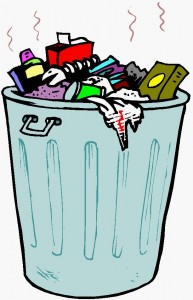 Is this your SRS deck?

But just because a card is fun doesn’t mean it’s not a candidate for deletion. Some cards start out fun and interesting, but we forget the context or we just don’t care about them anymore. Then they start to get that “uh… ew” feeling. Don’t be shy about deleting those. Just because you liked it at one time doesn’t mean you need to saddle yourself with it forever.

Same here. Sometimes I’ve been on the fence about deleting a card. But when I choose to delete it, I’ve never regretted it. I’ve never said to myself, Gee, I wish I could have that card back with the kanji compound I kept reading wrong again and again. Those were the good ole days! … Hahahahaha no. Every time I’ve deleted a card, I’ve felt free and invigorated, like I’ve finally thrown off a heavy burden. Like Drewskie, I’ve never looked back.

Indeed. When you find yourself unsure about whether a card is a candidate for deletion, just go ahead and delete it. You know which cards are good cards and which are iffy cards. Trust your judgment and wipe out those iffy ones as you come across them.

These three tips from Drewskie are the key to keeping your SRS fun. It shouldn’t feel like studying. It should feel like a video game.