It doesn’t matter how many kanji you do a day/how many sentences you’re learning/how much vocab you’re picking up, all that matters is that progress is being made. I know that sometimes it can feel like we’re lowering our standards by just striving to make progress, but then again, if you are like me, who had month long gaps in the initial stages of RTK study, maybe it isn’t a lower standard after all. 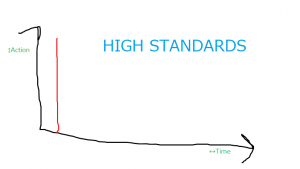 It’s all fun and games until it isn’t. That’s when you burn out.

Don’t get clever. Don’t make things painful with your “I must do a million kanji a day OR ELSE!”.

Less heroics. More consistency. More sustainability. You need a pace you can actually keep. That means, yes, don’t have high standards. Instead, have wide standards. 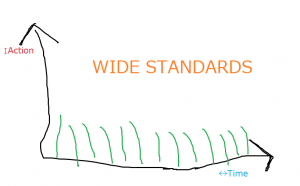 That means standards you can sustain. I don’t care how many kanji you do per day and  neither should you. What matters is how many days you keep coming back to the kanji. High standards say: “Do 100 kanji per day”. Wide standards say: “Do kanji, no matter how little, for 100 days straight”.

Area under the graph is what we want. We don’t need a lone, phallically-shaped, never-repeating spike on the left side: that’s binging and purging. You don’t want the Washington Monument. You want the Lincoln Memorial. Scratch that, you want…a lawn 1. Do you think it’s an accident that grasses are the most successful plants on the face of the earth 2? Grasses have wide standards, bro 3. 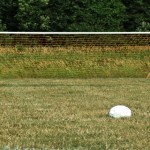 There’s another meaning for the term “wide standards”. Think of it in terms of a goal on a soccer pitch. If the goal is wide, then it’s easier to score, and from further away. On the soccer pitch of your Japanese life, you want to make the goal so wide that virtually any ball you kick can get in.

16 comments for “Don’t Have High Standards, Have Wide Standards”