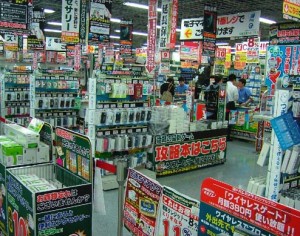 Any information you get about Japan that’s not in Japanese is virtually guaranteed to be second-hand and third-rate.

Information on Japan that’s not in Japanese invariably leads one to believe both good and bad things about this place that are simply untrue.

Example the first: Japanese people are deep and Buddhist and Zen-like and uncluttered and value emptiness. And all Americans are Mennonites, right? Yeah…no. Most people here barely even know what Zen is (not to mention the fact that Zen actually originated in China as a sort of mix of this thing from India called Buddhism and homegrown Daoism).

As for uncluttered emptiness, I have two words for you: Yodobashi Camera.
I rest my case.

Don’t get me wrong: those “Zen” ideas do exist in Japan, and they are held in high regard in certain quarters. But, they are just one rather small stall in the marketplace of ideas; they don’t dominate Japanese culture to the extent that well-meaning foreigners might wish they do.

This is very much a live-and-let-live society. If you’re not emotionally needy, if you don’t crave approval, if you’re calm, articulate and persistent, you can basically do and be whatever you want here. Materially, there’s no door or substitute window that an even moderately determined person cannot open in Japan.

Any actual animosity is directed exclusively (and quite inappropriately 😉 ) toward fellow northeast Asians — Koreans and Chinese. Many Japanese people I’ve read and talked to are surprisingly cognizant of this 同族嫌悪(どうぞくけんお) — this self-hatred/sibling-rivalry thing with the other members of what right-wing conspiracy theorist Takahiko SOEJIMA 1 (of all people!) described as: “the wider Chinese civilization of which Japan, while culturally unique, is simply a part” 2. Nobody hates like family, right?

Japanese people are much nicer and messier than they get credit for. I have visited too many bedrooms and woken up with my head nestled in too many people’s dirty laundry to think otherwise.

Learn the language. Anything you do without knowing the language is about as accurate as those times on MST3K or Whose Line Is It Anyway? where they watch a foreign movie with no subs and make up the lines based on what they presume to be going on. In fact, people who don’t access information about Japan directly in Japanese would be better off going to MST3K than to the usual verbal sewers *cough*gaijin forums*cough* they seem to frequent. That way, at least they’d pick up a sense of humor 😛 .

Those are the two yen I brought with me. ‘Could be wrong.

26 comments for “English: The Best Way To Get Second-hand, Third-Rate Distortions of Japanese Reality”