[Update 2011/07/30@0917 JST: The old transcript site died, but a new one has been found by enterprising AJATTeers! Right here: 攻殻機動隊関連 : 攻殻機動隊 : CMSB. Also, as a precaution against deletion (domestic Japanese site setup and maintenance prices are about ten times higher than the US, leading to high website attrition), there’s a mirror of this site archived at gits.ajatt.com . Please use the actual site as far as possible, though, ‘coz I think its owner earns ad revenue or something that way…I dunno. Plus they would prolly get a kick out of all the visitors 😀 ]

Hey all you boys and girls. Continuing our ongoing series of transcribed Japanese stuff, it happens that just as I was about to start doing it myself, I found that someone had already done it. Done what?

Transcribed all of 攻殼機動隊/Ghost in the Shell (GITS)! That’s right! All the movies [except Solid State Society] and of course all episodes of Stand Alone Complex. The dialog, baby. All of it. In Japanese! Exactly as spoken on-screen.

Those who have looked will know that Japanese/East Asian movies and TV shows that have same-language subs at all, let alone subs that exactly match dialog, are a rare and precious thing indeed. Like, I bet you’ll practically watch a mediocre show just because it has subs (depending on the language, I know I would). Some of the reasons for this are pretty decently summed up here. 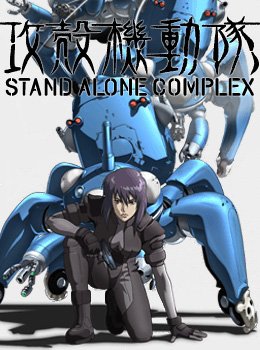 GITS notably has no Japanese subs on any of its present DVD releases, despite easily being one of the densest, most literary (is that even the right word?) programs of any kind ever made. Japanese subs for GITS would have been nice. But, whatever, now we have this website — with copy-and-pastable text to boot! W00t.

So, yeah, enjoy. By the way, I would definitely recommend this kind of thing for sentence-picking. And if any of you are inclined to make sentence packs or SRS files for people, this kind of thing, i.e. Japanese by and for native speakers, would IMHO be the best for, like, the health of the world, and in terms of source material [since, as we all know, material made for learners often tends to be some combination of boring and unrealistic].

As an aside, let it also be noted that Ghibli’s 物の怪姫/Princess Mononoke also has exact subs on its Japanese DVD release. Just FYI.

60 comments for “【台詞コーナー】攻殼機動隊・・・全部だよ／ Exact Japanese Dialog Transcripts for Ghost In the Shell, Son!”