“By doing less, and focussing on the one thing that counts, you’re actually doing more.”
Momoko

“Simplicity is the key to brilliance”
Bruce Lee

Giving less of a care.

Nowadays, “care” is a good word.
“I cyare about yew”, says that art teacher who gives the easy A’s, tells random stories and is too nice to tell anyone that their pictures are crap.

But originally, “care” meant “worry”. It meant “fret”. It meant “brood”. It was a bad thing. We still hold onto this original meaning in some set phrases, such as when children are jealously (and rather incorrectly) described as being “without a care in the world”.

GTD. Getting Things Done.
David Allen is a better man than me. He’s handsome. He’s funny. He does more for the world with his left pinkie than I ever have or will. That’s why, if he read this blog (which he won’t, but if he did), he wouldn’t be offended when I say that GTD, as much as it has helped, has also done a massive disservice to mankind.

GTD is a massive disservice to mankind.

David of the Allen wouldn’t be offended by that statement because David Allen himself knows that GTD is a disservice to mankind. He admits it openly. In the opening moments of the audio lecture version of GTD (which I once had on heavy rotation), Allen admits that the real way to solve the issue is actually to do less stuff.. To not do stuff. To leave things undone. To eliminate. To give less of a fucare.

Most of what you do, think and have doesn’t matter.

Secretly, you know this. That’s why you have so much resistance to doing it, or even thinking of doing it.

Somewhere deep, deep inside us, we know what matters. We know what needs to be done. And we know what isn’t it. That’s why we drag our feet so much about so much stuff, because it is busywork. Because it’s irrelevant.

But elimination, decisiveness, thinking about whether or not things matter, these aren’t memes 1 that are good for slaves to have. So you won’t find these ideas promoted too hard in schools or even to regular employees in businesses. The party line is that you should obediently do everything that’s set out before you and more. And don’t get me wrong…that is a good thing.
Just not for you.

I’ve seen this in my own life, in things big and small.
Here’s a petty example:

When I try to fit everything I can think of possibly ever maybe needing into my manbag — an iPhone, an Android tablet, a Pocket WiFi unit, a battery charger, a notebook…I forget the things that matter most: things like my headphones. My sweet, sweet, beautiful, cordless Bluetooth headphones. I can’t wear most headphones: they hurt my ears; they keep falling out; the bass sucks; the wires get all up in my bidniss (is that a word?). But these guys…these guys are my friend. 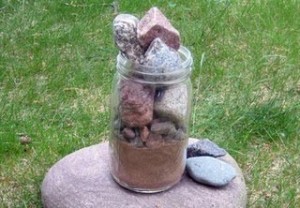 It’s like that Mormon object lesson with the pebbles, the rock and the jar. Try to fit in all the pebbles and there’s no room for the rock. Stick the rock in first, and the pebbles will fall in place around the rock, fitting themselves in the cracks.

At the end of 2011, I emptied my real life (paper) GTD-style inbox.
Into a trash bag.
A lot of the crap in there had been in there since 2010. Some even earlier.
Now, what does this mean?
It means that sleeping dogs can be allowed to lie. It means that things — even important-looking things (and paper documents have an incredible self-importance about them) — can be left alone. Untouched. Undealt with. Unsorted. Forever. And nothing bad will happen. In fact, only good will happen.

When you try to do everything — or even just make and maintain lists of everything — via GTD or otherwise — you probably will get more done. You’ll have checklists with lots of stuff ticked off. But…But. All the crap you get done probably won’t matter that much. You’re likely to get everything done but what matters most. You will run yourself ragged with minutiae. And you’ll be a good slave, but that’s all you’ll ever be.

The one thing that is most important to a slave is to figure out how not to be a slave. All a slave’s available resources — time, money, words, attention — should be spent on this important thing. GTD and its ilk teach (despite the best of intentions) you how to do everything but what matters. Because when you try to do 2 everything, “what matters” has to take a massive hit for the team.

Most things do not need to get done. Ever. Some things do need to get done. But usually like one or two things. Everything else can be left alone or done half-buttockedly. And, yes, it’ll be imperfect. But it’ll be imperfect even if you have a heart attack trying to do it all. No doubt there are exceptions, but you’re not a surgeon and I’m not curing cancer, so let’s not kid ourselves.

“But what if bankers and electricians and train conductors and surgeons just start doing as they please, all willy-nilly?!”
It’s always people who are neither bankers nor electricians nor conductors nor surgeons who ask questions like this. You push paper, OK? Calm down.

SAITO Hitori, one of Japan’s richest men (and her highest individual taxpayer) puts it best:
“Human beings are perfect at 78%. There is no 100% for humans. 78% is human perfection.”

Things are going to be imperfect either way, but one way is fun and the other way sucks.

The point of hockey — of just about any game — is to score goals. The goal of the game is…goals. If what you’re doing doesn’t help you score, you might as well rest. Get off the ice. Sit it out. Chillax. Swallow some Pocari Sweat. It’ll be far more helpful than whatever busywork the world at large is trying to rope and guilt you into doing. It might even save your life — most (as in 90%-ish most) hockey injuries happen near the ends of periods, when people are most tired.

You don’t have a kajillion things to do. You only have one thing to do. Decide on that one thing. That one thing should be so important, so valuable, that if it were the only thing you did the entire day (or what’s left of it), your day would still be a roaring success. That’s the kind of imbalance I’m talking about.

Bar causing other people harm, it doesn’t matter what else you do if you score.

The Pareto principle tells us 3 that life is beautifully imbalanced. A vital few things are incredibly important, and a trivial many are neither here nor there. In any group of ten things, there is almost always one that is by itself worth more than the other nine put together. We want to exploit this imbalance.

I hate it when people criticize me or my ideas. While my twisted, passive-aggressive, quasi-gentlemanly pride has generally kept me out of flame wars, in my heart of hearts I’m always like: “DON’T QUESTION ME!!!! NO! YOU DON’T GET IT!” So it actually pains me to call out GTD like this because I like David Allen; I enjoy his work; I think he’s really insightful.

Andbut 4 the man is better than the system.  The system –GTD — needs more work. They system needs to get in bed with (the ideas of) Pareto and Parkinson and Koch and Gawande. Pareto and Koch to eviscerate the waste, Parkinson to compress the time and Gawande to keep the checklist-making at that sweet spot where it’s useful but not overwhelming.

Let’s bring it home for Japanese.
A lot of you  fine, upstanding denizens of the Japanophilic regions of the Internet care way too much.
And what for?
What on or off earth for?
You’re going to die and be eaten by maggots, yet you persist in forcing yourself to manually enter the boring, unnatural content of some book of sentence patterns — every single one! — because you think it’s “good for you”? Because you “have to finish what you started”? Because you “should”?

Give less of a care. You only have so many to give anyhow. You only have so many fucares to give. Don’t go wasting them on pointless crap. Use them where they matter most, on the people who matter most. Or…do go wasting them on pointless crap, but know that you’ll be fresh out of fucares when it comes to things that actually matter.

When you try to learn every word or sentence possible, what matters most — getting used to Japanese — suffers. When you refuse to delete cards because “you entered them” and “you need to know” what’s on them, you effectively delete all your cards, because you start to avoid the SRS altogether. When you try to do a gazillion reps in one sitting, what matters most — doing reps at all — suffers.

Don’t let the trivial many things you could do overpower the vital few that matter.
The list of things you could possibly do is not a democracy. It’s an oligarchy. There is no equality in the list; there is only rampant inequality.

I don’t know the rules of chess. But I know that you don’t win at it by mowing down as many pawns as possible. Screw the pawns. Take that king. Screw the pebbles. Go for the rock. Handle the rock. Get the rock in first and screw everything else. Boom. Headshot.

Be stingy — economical — with your time and worry 6.
Save your fucares.
Start GLOAF today! 7

“Operations of thought are like cavalry charges in a battle — they are strictly limited in number, they require fresh horses, and must only be made at decisive moments.”
~ Alfred North Proactiv Clearasil Whitehead

17 comments for “Less GTD, More GLOAF: Give Less of a Fucare”