There’s always been a bit of a catch-22 with learning to use a personal computer (or smartphone or similarly advanced device) in Japanese.

What exactly do I mean?

“Why not just copy and paste?”, you say?

A massive, clusterhump of a chicken-and-egg problem it was.

The AJATT Computer Software Sentence Pack (CSP) ends this catch-22, because its sentences are SRS-ready, DRM-free and copy-pastable. This is a sentence pack for nerds, full of stuff that matters. Stuff like warning screens — undoubtedly some of the most important textual computer information of all. Because it’s no good to only ambiguously understand an important warning screen. You need precise understanding and certainty.

Language study has traditionally been dominated by humanities types. They set the curricula; they write the books; they make the rules. That’s fine; they’re nice people; they bleed when tickled and laugh when cut; my best friend is one, etc. etc. But the problem is that they don’t like computers; they mistrust computers. That’s why they’re in the humanities to begin with, to get away from all that coarse, colorful, fun, useful, flashy stuff 😛 . Some of them even have a Neil Postman-esque disdain for all modern technology. They barely tolerate electronic dictionaries. Technologywise, they would just as soon have us go back to the Bronze Age, or at least the Renaissance, presumably because that would “build character”.

But software and computers are all around us, and they ain’t goin’ nowhere. That smartphone in your pocket? More computer than phone.

Make no mistake, software now runs your life. Geek or not, you spend your days glued to machines through software; your smartphone is now an extension of your body. You probably touch it more than you touch your lovers — and you’re one of the cool kids! I know hippies — hippies — modernity-hating, outhouse-loving, barefoot-walking, won’t-take-Advil-when-they-have-a-headache, contraceptive-hating-but-somehow-cigarette-loving, pothead hippies who literally text on their iPhones while making out.

This CSP is real, natural Japanese as it is used in software, because software unites us all. Software is our new reality.

Before I was that guy who wrote raunchy emails and boring, repetitive, self-helpy articles and made dumb videos, I was a guy with a degree in computer science — not Japanese. I was a software engineer at a little corporation called Sony back when that meant something (lol), programming middleware for CyberShot cameras.

As an IT consultant, I helped Japanese companies stop shooting themselves in the Internet foot. As a video game translator, I helped millions of English speakers who can’t or won’t learn Japanese, enjoy the some of the best of Japanese pop culture. You name a big game over the past few years and I’ve probably been involved in it, although non-disclosure agreements prohibit me from sharing the exact details with you.

Here at AJATT.com, I also wrote software like Surusu (the SRS), built entire learning ecosystems like Neutrino and wrote all manner of little programmatic tools and scripts that keep AJATT running somewhat smoothly 😛 .

In short, my geek-fu is strong. Almost as strong as my self-promotion-fu. And it is in this geeky spirit that I present to you this sentence pack for all humankind, for all 10 types of human beings — those who understand binary, and those who don’t. So geek especially, but geek or not, this sentence pack is for you. The most modern, realistic, current, natural, up-to-date and fun learning material of its kind ever produced. And it can be yours now and forever. 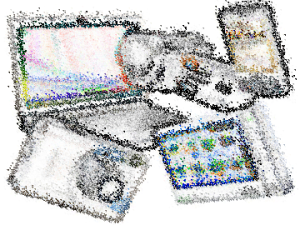 So Why Would Anyone Even Want This?

For more or less the same reason why you would want My First Sentence Pack. The key words here are ease, convenience and, to quote a Simpsons episode, “can’t somebody else do it?”. Sure, you could go figure out how to read that computer Japanese by yourself — you totally can; I did. You could go out and buy buy thousands of dollars’ worth of gear, read through mountains of hardware manuals, scour hundreds of websites — thousands of pages of text — in order to compile, transcribe and translate your own sentence pack. There’s nothing wrong with going it alone. Independence is noble. But if you can’t be bothered, if you don’t want to put in the effort, then consider this the equivalent of paying somebody to do your homework for you.

Who’s It For? Who Should Get the Computer Software Sentence Pack (CSP)?

The CSP is for you if:

Who’s It Not For?

The answer to the first question is no. The answer to the second is yes. MCDs re-orient how we work with sentences; they change how sentence packs are used. And as a result, MCDs actually make sentence packs even more useful by allowing us to absorb and internalize them both more deeply and more effortlessly. “More effortlessly” — that sounds funny, but you get the point! Ultimately, the point is to get the language inside your head, inside your body, and MCDs, combined with sentence packs, accomplish this in spectacular fashion.

Sweet! How Can I Get Mine?

The Computer Software Sentence Pack (CSP) comes in two versions, basic and deluxe. Basic’s cheaper; deluxe is more value. Because the CSP is so closely related to the similarly-themed “Gadgets and Electronics Sentence Pack“, I’ve decided to give you the latter for free, combining them into one super-pack containing hundreds of sentences, with natural and authoritative English translations and kanji readings (furigana) to boot. And it’s all based on engaging, for-native-by-native subject matter that’s actually relevant to your life, because how many times are you going to read a textbook that shows you how to say you’re a student with two brothers and a younger sister before you want to shoot yourself? Exactly.

Buy it. Try it. No likey? No payey. Just ask me for a full refund. No fuss. No hassles. Just be like: “I love you, Khatz. You’re so pretty and smart. I just want a refund for the Computer Software Sentence Pack. I promise I’ll be back soon”, and AJATT staff will run your refund for you with a smile 😀 . We know you’ll be back 😛 .