You know what? I’ll just come out and say it: I like Darwin as much as anyone from where I’m from can like a Victorian Era English gentleman — economically. I’m not proud. He’s a man; I’m a man; I like him. What? We’re all adults here.

But I’m not a big fan of Darwinism. Heck, even Richard Dawkins, the man I pray to every night before I go to sleep, isn’t big on Darwinism.

Even Darwin didn’t like Darwinism. He never said “survival of the fittest”; he didn’t coin that phrase; he said “descent with modification”. Darwinism wasn’t good for the 20th century; Hitler and Marx were both fans of it, although perhaps for different reasons, which tells you a lot right there. Hey, I may pray to Richard Dawkins, but I live the law of Godwin.

But there’s definitely a place for Darwinist (should that even be capitalized?) or Darwinistic games, and one of those places is outside of real life, in the abstract world of SRSing. Here, where all that’s being “eliminated” are cards (and even then, not so much being eliminated as “moved” to “trashcans”), we can afford to be brutal.

So here’s how you do SRS Darwinism. Or, more accurately, here’s how I did it, and maybe you can try it and see how it works for you.

The sentences method, lazy kanji, MCDs, all were once brand new methods that uprooted what had come before them. All were invented by people.

How do you deal with these changes?

Let’s take a concrete example: the change from the plain-Jane “10,000 Sentences” method to the MCD method. How would we pull off something like that? The un-bucolic, denatured (bear with me, I’ve been reading too much Emerson) schooled mind wants to just go out and delete the old deck and make a brand, spanking new deck. The schooled mind wants a clean slate.

Bad move. No clean slates for you.

Instead, you want a dirty transition. Specifically, you create a new deck while keeping the old one. Create as many new decks as you want, each one a living experiment. So, you have (in this example) your old 10k sentences deck and your new (MCD) deck existing concurrently, contemporaneously, which is Italian for “with temporaneously”. You have two  (in this example) “parallel” deck universes. You keep adding cards to both, you keep doing reps on both. 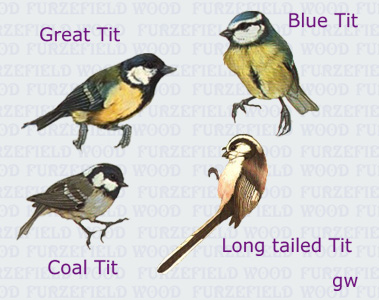 Birds of the tit family, all calm

Now what? OK, so there you are, two concurrent decks. It looks like I’ve just doubled your work. It doesn’t feel very minimalist…You see those tits of yours? Calm them. Stress isn’t good for little birds.

Just keep going, because over time (days and weeks)…

…One of the decks starts slipping. Through no fault or conscious effort of your own. This is good. Let it slip. Let it go. Suddenly, you look back and one of the decks (perhaps the new one) is big, strong, dynamic and healthy and the other is just gathering dust like the penguin toy from Toy Story…what? 2? 3? Anyway, yeah, like that.

It’s a dirty process. It’s an unclean process. It’s heterogenous (sp?) and messy and tangled and gradual and kinda non-linear. In other words, it’s a pretty good process 🙂 . It’s less of a jarring jump and more of a natural transition, with an intermediate period, an interregnum (if you will), where you have multiple decks for the same purpose. Eventually, the balance of power — of attention, of card creation and reppage — tips in favor of one of the decks.

When the upstart deck eclipses an old deck in scope…that is when you abandon (or even delete) the incumbent.
Or vice versa if the old deck outcompeted the new one.

So, basically, rather than burning down your old house and going out into a brave new world with nothing but vim, vigor and a smile, you get to have two houses for a while and spend time in both. See which one you like best (there’s always a favorite), which will become clearer as the second house fills out — or perhaps fails to. When it does become clear, you can abandon or get rid of one of the “houses”. Yes, an SRS card deck is a house 😛 .

5 comments for “How to Make Big SRS Changes Smoothly: The Darwinian Game”