Throughout the time this blook has been running, there has been plenty of what might be called “personal developmenty” or “motivationy” content. And there’s good reason for that. People are failing to learn languages for two basic reasons. For one thing, their methods suck. But even more fundamentally, their entire state of mind (confidence/lack thereof) and ability to manage themselves through a project of any considerable size and length is literally zero. That’s what you get when you put people through years of “sit down, shut up and do as you’re told”; you get people who only know how to be managed and be led — you get sheep.

When I was in college, I used to try to save money by borrowing books from the library, or reading about books online. Looking back, this was not an entirely flawed strategy. Plenty of books need not be bought; they can be picked for information once and never looked back at again. But some books are so important, so valuable and so ripe for re-reading that they do need to be bought. And owned. And held. And loved. And read (<– do you like how this is an afterthought?) And highlighted the heck out of. This is one such book. It’s that good and it’s that important. 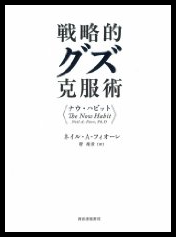 A lot of books in the self-improvement/personal development field are full of crap or otherwise not worth your time. This is not that kind of book. This book owns. And if you read it, mark it, re-read it some weeks later, and while reading really start to apply the lessons it contains, I am sure you will find more success in both your language acquisition projects and in life generally.

The book is The Now Habit / 戦略的グズ克服術―ナウ・ハビット / 拖拖拉拉不是好朋友 by Neil Fiore . I’m going to sound super-mean here, but with notable exceptions (like AJATT readers!), far too many military people I have come across have been…intellectually slow jerks prone to violence. Please, do not threaten to send cruise missiles over to my house, you’re not smart enough; I’m just telling you my experience with military meatheads; I thought it was just an Army problem but even my beloved Air Force seems to be rushing to meet its quota of schmucks — ten solid years of brainwashing from Stargate SG-1 cannot erase this fact. And then there’s that annoying fact that kind of gets left out of polite conversation…the fact of military organizations basically existing to perform and/or enable the (a) burning, (b) stabbing, or (c) torture of human beings, all — we are told — for the safety of certain abstract nouns. Plus there are cool badges. And fortunately the human beings getting a-b-ced are typically brown people so it’s all good pass the salt.

Why do I get caught up in flamewars that are never going to happen? Oh yeah — this Neil Fiore guy is ex-military. And why that matters is because you just don’t get books this perceptive, gentle and useful from actual human beings, let alone military personnel.

…I feel like something deeply dehumanizing was just said…

Anyway, think about it — AJATT is useful and perceptive, but it certainly isn’t gentle with all its misogyny and antisemitism and constant scatalogical references. Pooh. Most personal development books written by women are gentle, but useless in terms of application and too muddled to contain any real perception. Most PD books by men, meanwhile, just suck all around. So, this Now book is a little miracle: this book has the minerals. 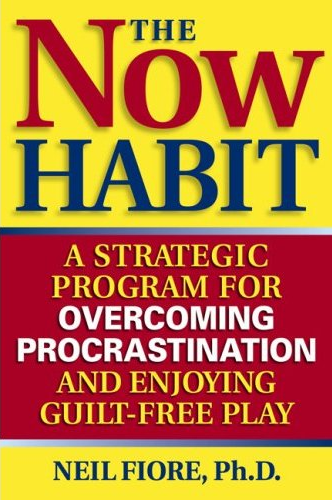 How does it work? First, Fiore firmly locates the causes of procrastination. Yeah, the P-word: the AIDS, cancer and pins-and-needles of people trying to get things done. For most of us, the root cause comes down to unworkably high standards gradually inculcated during childhood, often by well-meaning parents who themselves suck at self-management. Anyone who’s experienced or observed many self-consciously “high-achieving” families knows what I’m talking about: the parents who, when their kid gets ten A’s and one A-minus, rather than congratulating the kid, instead ask: “Why did you get an A-? This is unacceptable. What the flock, kid?!”. This can turn the kid into a failure-phobic perfectionist.  The kid  then (unconsciously) uses procrastination as a defense mechanism — starting work late because then at least “lack of time” can excuse what would otherwise have to have been a perfect project by her internalized standards.

My family always wanted the best for me, I grew up comfortably and well-off…but…(*cue  violin*) my childhood was a lot like this; nothing was ever good enough; no matter how well I did, the question always remained: “But Khatzumoto, why didn’t you X?”. This is the part of the movie where Robin Williams tells me it wasn’t my fault and I cry 🙂 . Haha, it wasn’t that bad; I’m just super glad to be able to realize it and change it now. The point is: (1) Standards that are too high make it impossible to get any work done outside of an emergency, so one of the major reasons otherwise smart people procrastinate is to force an emergency — and therefore a lowering of standards. (2) Fear of failure is not the same as desire for success; the latter will get you places, the former will get you…on medication.

But if Fiore stopped there he’d just be like every other psychologist — someone paid large sums of money to blame everything on our parents. Fiore goes beyond that and details his simple-looking treatment for the disease. He teaches you to make sensible standards, make fun the center of your life (getting rid of the lockdown/martyr syndrome through what he calls “unscheduling” — a schedule that focusses on requiring yourself to play), and ask yourself constructive questions (when can I start? where can I start? what can I do right now?), all part of a full complement of techniques based on behavioral psychology i.e. Burrhus Frederic Skinner. That’s right, kids — the very same techniques that “The Man” uses to manipulate you, can be used for good, so you can manipulate yourself.

Fiore’s techniques are actually rooted in his experience getting a Ph.D in psychology after his time in the military; in this sense, they are actually better than most of the The Man’s tricks because not everything The Man does constitutes effective management, in fact a lot of people’s problems getting things done come from internalizing bad management tools (in a word, coercion). As a Ph.D student, Fiore noticed kids around him with no lives, apparently spending all their time on their dissertations, always stressed out, for years at a time, but not getting jack done. He basically resolved to use the psychology knowledge he was acquiring on himself (what a concept!) to get his Ph.D done in a really short time while actually having a life. 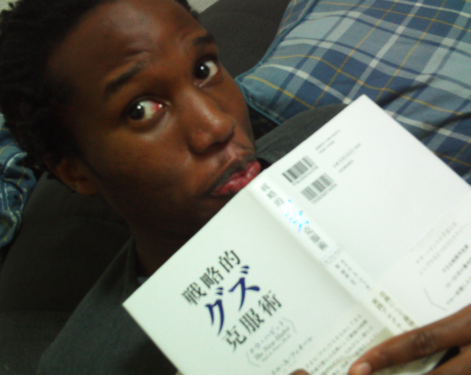 Which is all well and good but I know that doesn’t get across how cool this book is. It’s a book that sounds dry in description but is superb in effect. When Fiore is explaining the situation, it’s as if he knows you personally; that’s how perfectly he has understood the problem at hand. This man knows what’s up and he knows how to deal with it. So, please, don’t just take my word for it. Really, don’t. My explanation of it sucks. You need to read the real thing in its full, original context. Primary source, baby. Read or listen to the book. And when you’re done, read it again. In fact, if you can, get the audio book rather than the straight text. Why? Because (1) You’re much more likely to repeat it, and (2)  It leaves your hands free so you can get implementing right as you listen — after all, the theory in this book is tight, but it’s meaningless unless you start applying it, and if you’re going to apply, the best time is right there and then. Right now. Go on. You’ll thank me later. This is easily one of the best works in its field, as well as the least-promoted.

I thought there was no Japanese version, but it turns out that a Janslation (Japanese translation) of this book finally came out only a few months ago (April 2008). I was so struck by its quality and relevance to the very thing at hand in AJATT — a long, self-directed project — that I felt it deserved a plug here and even a titillating photo of me. Think of it as an extension of the Mental Tools category. Before finding out about the existence of the Janslation, I would listen to the English audiobook while reading something in Japanese, just to keep the old immersion up. Hey, I come correct.

Anyway, that’s all from the manly desk of Khatzumoto.

[P.S. I hadn’t realized it while writing this, but Victoria the Cunning Linguist actually mentioned this book way back in the day. Thanks, Victoria!].

42 comments for “The Now Habit: Language Acquisition as a Long-Term Project”