It always struck me as the height of hubris for someone to refer to their own ideas, methods and techniques as a “philosophy”. Such is a title best bestowed upon one by others. But I am an intensely hubristic man. An arrogant, arrogant man. So, yeah, that’s what’s up.

Also, what’s the difference between a technique and a method? I don’t really know…at this point, I think I’m just using words because they sound cool. Hey, faux intellectualism beats anti-intellectualism! In my book, at least.

And, while we’re at it, what’s the difference between self-deprecating humour and wallowing? When does a charming humility cross the line into negative-sign self-obsession? Again, not a question I can answer for you! LOL.

Anyway, it’s been a rough three paragaphs, so let’s get going.

That many AJATT ideas apply very broadly is a consistent source of wonder both for myself and many of the (tens of?) thousands of people who’ve read this site over the years.

And it’s true. No humility necessary: the ideas shared here will help you not just in the Japanese game but across many of the games that make up this thing we call human life. One AJATTeer famously lost a bunch of weight and got fit, just applying so-called “AJATT principles”.

But not all AJATT ideas are created equal. The “f### moderation, go balls to the wall and take things to their logical extreme” idea is one of these. Again, as the rappers say: “don’ git it twistid” (don’t get it twisted) — I still stand by those ideas; it is, indeed, immoderate to be moderate all the time.

Having said that, total immersion/overwhelming force is, by its very nature, something we cannot do all the time everywhere. It is the nuclear option of learning. It is a high-expense, high-yield tactic with lots of collateral damage (that we accept and expect). But you can’t just go using it willy-nilly. Total commitment is, by definition, a decision to exclude/diminish/ignore everything else. Every big “yes” is also a million “no’s” to everything else (and every “no” is an opportunity to say “yes” to what we truly want, so it’s all good).

There’s also the fact that there are only 24 hours a day, and you are (or should be) asleep for at least about a third of those. The ceilings on our time and energy are very real. Ironically, they set us free. But we ignore them at our own peril.

So, I have tried (and, temporarily at least, succeeded) many times of the years to “total immerse” in positive/personal development/business materials, seminars and audiobooks. Each time, I reasoned: “wow, imagine how awesome I would become if I consumed as much Dan Kennedy and Tony Robbins as I do anime and dumb YouTube videos?!” (the answer: very awesome, but also a little antsy, not to mention the damage to Japanese and Chinese language ability because of time taken away).

Rightly or wrongly, I love pop culture. I love dumb entertainment. I love wearing sweatpants all day every day. My personal life strategy is not to fix my flaws but to channel and exploit them. A “righteous”/”wholesome” content strategy — all wholesome all the time — is not something I am ready to do forever. I have, incidentally, pursued it for extended periods with great success, but I want something I can sustain indefinitely, for all of my life. No binge and purge, thank you.

So, I take my wholesome content more like vitamin supplements rather than as the main course: short, sharp, fun snippets of greatness, ramp scaling into them and polar switching with dumb entertainment. 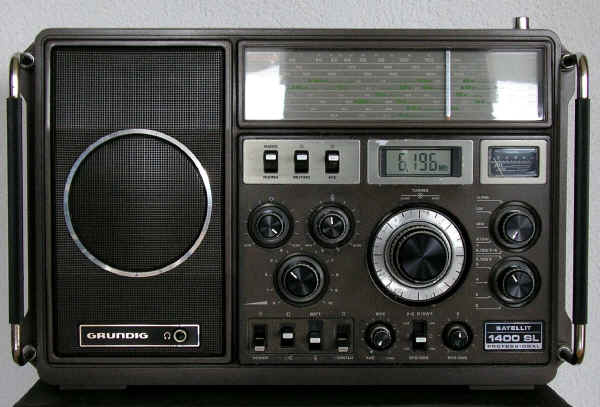 The Grundig Satellit 1400: Dials Up The Wazoo, Witches!

The “AJATT Learning Philosophy”, such as it is, does apply broadly, it’s just that you sometimes need to know when to apply which bits. You need to know when and when not to go “full retard”/”berserk mode”. It helpsand this is a MAJOR understatement to have more than one gear, just as it helps to be able to run, swim and drive at different speeds, different paces, depending on the needs and particulars of the environment and situation at hand.

This is the meaning of “failing gracefully“. Metaphorically speaking, we — and I say this as much for my benefit as for yours — need to learn to operate based on dials rather than buttons or switches. We need to be able to dial up or down, not just switch on or off. We need to be able to fine-tune our effort like the signal on of those old, expensive, precision-engineered Grundig German radios.

Driving fast in a parking lot is just as dangerous and damaging as driving slowly on the highway. Just be sure to avoid the trap of trying to be too perfect and not driving at all. And, yes, this is a metaphor for all action (it doesn’t actually matter whether or not you drive; I don’t even know how).

All this analog talk of dials doesn’t negate our more “digital” binarization stance. If anything, it enhances it. Binarization is a dirty way of solving overly complex analog problems; “dialization” (ramp scaling being one manifestation) is a way of solving oversimplified “digital” ones by de-binarizing them, making them dirty again so we can do them dirty. Sometimes you modulate, sometimes you de-modulate. The strategies are complementary opposites forming a happy, healthy whole.