Huge fan of the site,  I’ve read almost all of it.  I come to you with a question because I respect your opinion more than anyone on the subject of learning languages.

I live in Seoul and I’ve been learning Korean for a little over 2 months.  I enrolled in a course, which ended up with me as the only one in the class, so its basically 1 on 1 tutoring for a cheaper price.  It breaks down to a little more than 10 bucks an hour so I think it’s really worth it.  I do 6 hours a week, 3 hours twice a week in the morning.

My teacher is very cute and nice, but when I told her to stop teaching from the book because I thought it was bad (IT IS!), she got a little lost in how to teach the course, because thats the only way she’s ever done it.

It’s kinda turning into me dictating what I want to learn but I’m afraid I’m not really sure the best way to maximize my 2 three hour sessions a week and when I have nothing to suggest, she just goes back to what the book would teach.

I kinda came up with [a] scheme [whereby]:

I do many SRS reps outside of class and have designated that as the time to learn new vocab, so learning new vocab doesn’t take up time in the class.

2 months into learning, with a 1-on-1 tutor for 2 three-hour sessions a week, what would suggest I do in class?  How can I get the best value from these 1-on-1 classes? [Emphasis added]

I understand that you are very busy, any advice would be appreciated.  Learning Korean is my priority and I know you are the man who can help me on my quest!!

Thanks a ton,
[Jason]

Let’s answer this one.

I respect your opinion more than anyone on the subject of learning languages.

Learning Korean is my priority and I know you are the man who can help me on my quest!!

In the name of the Khatzumoto, the AJATT and the Internet…

Seriously, though — good question; great question!
I don’t know how workable this is for you, but my choices would be:

1. Every Day Is A Field Trip

Think of your tutor as a surrogate mother more than anything else.

Go to town with her. No, literally.

Hang out with her and her friends…go out on errands with her — shopping, bank, post office, subway station, telephone calls — then you can see and hear how she REALLY uses Korean.

Not how she CLAIMS to use Korean.
Not how she BELIEVES Korean SHOULD be used,
but how she REALLY uses it.

Her word choice, her enunciation, how she mumbles, how she bounces back from forgetting a word. The shape of her mouth. Her word choice. Her actual decisions about formal versus casual register.

Wherever possible, record your conversations to playback and perhaps even discuss/question later.

Eat with her. Cook with her…have her tell you the names of foods and how to eat them, as you eat them.

Copy her music. Watch what she watches — especially comedy. Read the comics she reads. Watch her favorite movies with her.

Walk around town, have her answer your questions:

This is highly unconventional, but ultimately, IMHO much more fun and more effective. I’m sure she’d rather be hanging out at the mall or something, than sitting around playing schoolmarm with you.

You live in Seoul, man! The real Korea is right in front of you. It is right outside the door. Use it. Enter it. Live it. Don’t shut it out because of some stupid book or “rule” or convention.

Basically, she gets PAID to just live her life — be Korean in Korea — and you get to reconstruct a realistic Korean childhood.

It’s practical and fun; it’s win-win. She gets her errands done AND gets paid. You can get help with your errands as you learn to stand on your own two feet as an adult:

A more interesting exercise with text (and something I actually charmed my Japanese friends into doing) would be to have her forward you copies of her personal and professional emails, so you can see how real Koreans write to real Koreans in real Korean. Real emails are one of those things that are as common and useful as they are private and ephemeral — we all write email, but it’s all kept in such a closed circuit. Plug in.

Read those emails and SRS them. If she uses Korean words that are not yet defined in dictionaries, as native users are likely to do, your in-person time together will be a perfect opportunity to ask what stuff means. And, yeah, tell her she can remove any incriminating information.

Also, you are probably exposed to machine-printed Korean to the exclusion of handwritten Korean. Have your surrogate mother give you some real, handwritten Korean text. With all the electronic writing done today, handwritten language can come as a rude shock to print readers unless they proactively expose themselves to it.

One more thing on reading. Remember the bedtime story? Bring it back. Have your Korean mother read text aloud to you unprepared (no practice run), so you can see and hear her rhythm, cadence and best of all — how she bounces back from misreadings and other mistakes. Definitely record this, to listen to later. She can read you anything you want — newspaper articles, children’s books, comics…whatever.

Basically, get out of the foreigner-versus-native-Korean paradigm, and become her Korean kid/babysitee who just happens to have a strange condition that makes him look like, I dunno, a grown man of German(?) descent.

Due to her influence, your speech and writing may become slightly feminine (or at least “on the gentle side, for a man”) for a while. But this is not a problem; you can always fine-tune it and “man it up” later. The most important thing is to shed your foreignness and assume a Korean persona.

Linguistically, the difference between a foreigner and a Korean is far larger than that between a Korean man and a Korean woman. So, “fine-tuning” already native-like speech is one area where “Pimsleur time” actually applies — two weeks will be all you need to go from foppy metrosexual to brooding machosexual.

It sounds like your tutor is somewhat at a loss for what to do. Some of that is probably because she’s been trained, like most of us, to (falsely) dissociate fun and learning. She’s probably relieved to be off the textbook, but doesn’t feel permission to really “cut loose” as it were.

Now is your time to “lead”. But here, leadership does not mean giving orders. Leadership just means encouraging her to be herself, giving her permission to let go and chill, for the benefit of you both. Leadership here is about making sure everyone is (1) happy and (2) gets what they want. It is not about commanding; it is about almost invisibly shaping situations and outcomes — you can lead without anyone ever knowing you were leading; you can lead without being “in charge”.

So, the keyword is: “mother”. Surrogate mother.
The relationship is casual, but (in your case, since you’re paying) she has above-average responsibility to (1) answer questions and (2) slam you for any minor Korean mistake, where normal friends would let it slide or be like “dude, I’m not your tutor-slash-surrogate mother”. 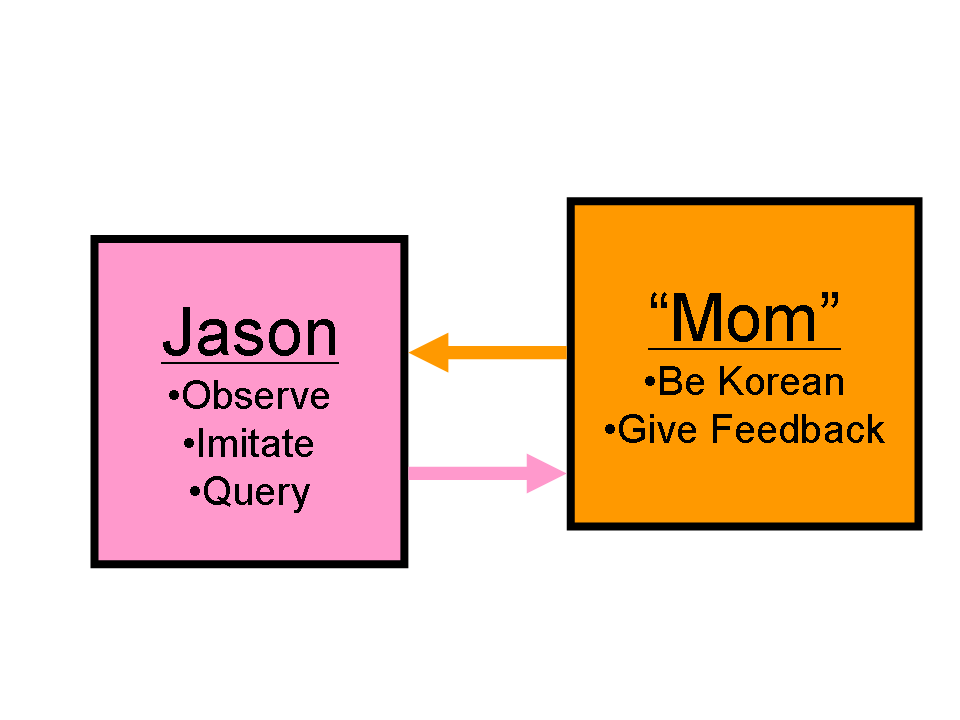 The key actions are:

So don’t be her student. Be her family, her sidekick; become a part of her life, and by extension, the real lives of the real Korean people in her social network. Many Korean girls get adopted by foreign families, now it’s your turn to be adopted by a Korean girl (six hours a week)!

So far, I’ve only gotten to know a handful of Korean or Japanese-Korean girls in my life, but half of them have been, how do you say…unflinchingly frank people. Coming from a somewhat indirect culture myself, such behavior just seemed…cruelly tactless at first. But when you use this cultural trait to your advantage, it actually turns out to be a priceless gift. EVERYONE should have at least four female friends from Korea.

Now, I don’t actually know what your tutor is like, but I’m sure you’ll figure something out and I’m sure it’ll be really cool and fun — I mean,  “get paid to play”: it’s a totally sweet deal.

Remember, all of this is just one unreasonably handsome man’s idea. It’s just what he — I — would do if I were in your situation; it’s where I would start, tweaking as necessary along the way. Ultimately, it’s your life. Make your own choices; make your own decisions.

Keep it fun, keep it Korean, and the rest is details.

Let me know what you end up actually doing and how it works for you! And maybe some AJATTeers will have succesful models of their own to share with you here 😀 .

25 comments for “Surrogate Mother: The Proper, Correct And Only Way To Do Private Tutoring”