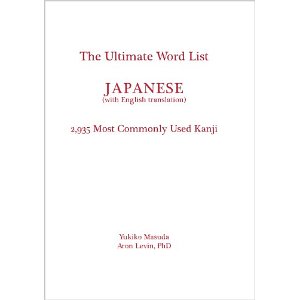 This is a guest post from Dr. Aron Levin, author of The Ultimate Word List – Japanese: 2935 Most Commonly used Kanji (with English translation)

Khatzumoto has allowed me the distinguished honor of writing a guest post. The reason for this post is to PIMP my new book. It’s called “The Ultimate Word List – Japanese: 2935 Most Commonly Used Kanji”. I compiled a huge number of Kanji from online books, news articles, wikipedia, etc., and sorted them by frequency. Then I hired a bilingual Japanese translator (and K’s friend) to provide pronunciation of each Kanji (on’yomi and kun’yomi), and English translation.

I created another 15 books in lots of languages in a very similar fashion. All are sorted by the L2, then translated into English and also transliterated if the language uses a non-Latin alphabet (Greek, Russian, Hebrew, Arabic, Persian, Mandarin, Japanese). All translations/transliterations were done by bilingual native speakers.

These types of frequency lists are useful because the most commonly used words, in any language, represent a large proportion of the words you’ll read and hear. According to my calculations, the 100 most common Kanji represent of 36% of the Kanji you’ll read. Over 1/3! In only 100 Kanji! In Spanish, for another example, the first 100 words represent 57% of words you read. It’s easy to understand the value of learning the really common words.

How do I use the Hebrew frequency list? I used it as one of my primary entry points into Hebrew. I found Hebrew kind of hard to beak into because, even though Hebrew uses an alphabet, you don’t necessarily know how to pronounce a word until you hear it. Thr r n vwls n Hbrw (There are no vowels in Hebrew). With my Hebrew frequency list, I was able to learn the most common words and their pronunciation variants. For example, the 2nd most common word in Hebrew is את. (Don’t forget to read right-to-left) It is pronounced either “et” or “at”. Those two pronunciations are both very important words and have completely different meanings. “At” means ‘you (f.s.)’, and “et” indicates the next word is a direct object.

For another example, take the word רק. The first letter is ר, which is an ‘r’ sound. The second letter is ק, which is a ‘k’ sound. רק is pronounced ‘rak’ and means “only”. The book will tell you all this. It’s useful because otherwise you have no idea if it’s pronounced rak, rek, rik, rok, or ruk. “Can’t I just look that up in a dictionary?”, you ask. YES! Of course. But as a newbie Hebrew-learner, you had no friggin’ idea that רק was a realllly common word. And that’s the point. Your dictionary says it’s just 1 of 40,000 equivalently crazy looking Hebrew words. But the frequency list tells you it’s the 31st most common word in Hebrew. Big difference.

Will memorizing these books make you fluent? HELL NO. They are merely a starting point. I am studying Hebrew on my own and made the Hebrew book first because I wanted it for myself. I found knowing the most common words useful in my self-studies, so I figured people studying other languages might want a frequency list, too. It helped me break into the language and gave me confidence that I was learning important stuff right from the beginning. Studying individual words like this is most beneficial at the start of learning a new language. As you progress, however, sentences are the best. People speak in sentences. But those sentences are made up of words. And certain words are used more than others. Knowing the most commonly used words will only speed up your language learning.

As Khatz would say, get this book if you want eternal happiness and sweet abs.

Good luck with your studies,