So, one time, back in the day, in college, I was taking a class (as one does) in computer networking. And our assignment was to write a web server — an HTTP server, in Linux, in C++.

Our professor, Dr. L., was and is a totally cool guy, the perfect combination of fun and on the ball, if that makes any sense. The perfect balance of fun, fair and straight-laced. So fun that he’s fun and you have fun with him, but not so “fun” that he’s irrational and unpredictable and never grades any of your work.

So it came as pleasant shock to us when he went: “Class. Guys. I believe that all (networking) sockets code is descended from the same source. So there’s no point you going out and re-inventing the wheel. Feel free to take some base code and copy that and then work from there”.

That’s right, Dr. L had a refreshingly open attitude to copying. In college. The ultimate plagiarism-phobic (and, by extension, imitation- and copying-phobic) environment. Mind you, what Dr. L was suggesting was not the same as plagiarism; it was simply a frank and matter-of-fact acknowledgment of the reality that all learning begins with imitation 1. That other people’s experience can be a valid starting point. Looking back now, as an “adult”, it seems obvious enough, but in the hermetically sealed school environment, it took a great deal of courage and candor to admit that kind of thing openly.

What does this have to do with writing a Japanese resumé (curriculum vitae) and cover letter?

You see, a resumé is not supposed to be original. Don’t believe what people tell you. If it were supposed to be original, there would be no conventions; it wouldn’t even have a name. It would be more like a portfolio, just unique and “out there”. No, a resumé is supposed to be roughly the same as everybody else’s in order to invite comparison — that’s (unfortunately) what it means to compare and compete with others: it means to make yourself the same as them (and thus comparable by common criteria — because only things that are similar can be compared)…while making yourself different in small, structured ways (that still fit into the overall sameness) and not doing anything stupid like making annoying, obvious spelling (kanji) and grammar mistakes.

From my time as an IT consultant, when I evaluated Japanese resumés of IT professionals for a non-IT company, I can tell you that orthographic errors were instant kill material for us. That tells you right there that uniqueness and standing out are not instantly welcome by any means. In fact, in the early stages, we were looking for any reason to reduce our workload, and typos were one of the best excuses for that — a simple, straightforward and unambiguous exclusion criterion.

The point of a resumé is to not distract with any unwanted uniqueness while injecting a tiny, almost imperceptible amount of “permissible uniqueness”. But by far, the sameness is the main, the bread and butter of the document. 2

And how are you supposed to produce this sameness? Well, by copying. That’s right, copying. There’s nothing wrong with copying as starting point. It’s not like you’re simply taking someone else’s document and putting your name on it. That would be plagiarism. That would be lying. That would be falsifying your background.

No, you’re taking the existing conventions of the culture (which matter, to a lot of people anyway), imbibing them and making them your own, and, yes, maybe even innovating in the tiny, “permissible” ways that are welcomed in resumé innovation — but you first need to know precisely what the conventions even are before you innovate beyond them. Otherwise, you’re just shooting in the dark. It’s like the difference between a writer who breaks grammar rules knowingly, and one who breaks them out of ignorance. Big difference.

One of the aims of AJATT.com, in addition to giving people all the tools and advantages I had in getting used to Japan and Japanese, was and is to give people the tools I did not have, but wish I did and that would have made my life easier. When I was starting out in the world of Japanese work, there was very little for me to go on in terms of online help, and my impression is that this is still the case. So I enlisted the aid of friends and acquaintances and pros and friends of friends to help me write my own resumé and cover letter.

Many friends. Many experts. Many perspectives. People with international experience and people without. Hundreds of hours and thousands of edits. All of their advice injected and distilled into a single, gleaming package: 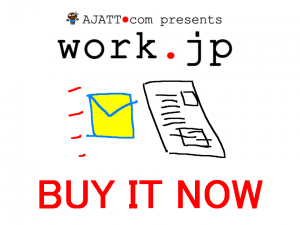 What is the work.JP Starter Pack? It’s canned success is what it is. It is a fully loaded sample Japanese resumé and cover letter correspondence for you to use, based on the very resumés and cover letters that successfully got me work at and with places as diverse as Sony (programming), NEC, Toyota, Honda and Konami (translating) and all that good stuff, all without a single Japanese language test certification to my name.

So if you need to write a Japanese resumé and cover letter, but don’t know how, if you need a document that is totally native-looking and native-structured in its Japaneseness but that also takes into account the fact that you grew up and were schooled overseas, that you aren’t Japanese but that you can darn well function like it if you need to, then the work.JP Starter Pack is for you.

That’s it. Simple. Of course, it’s all been checked to gleaming perfection by real Japanese people. And it all takes into account the specific needs and situational peculiarities of non-Japanese people/residents.

Some people love a product, some people just want to be friends. So, as always, the AJATT Fo’ Shizzle Refund Guarantee remains in effect. If you don’t like, you can get a refund any time. Just be like: “Refund” (to refund and ajatt dot com), and AJATT staff will come at you all like: “Take your money! But tell me it was real…tell me you loved me…”. Emotionally charged, but brief 😛 .

4 comments for “How To Write a Resumé (CV) and Cover Letter in Japanese: The work.JP Starter Pack”